Directions to ASP
​ASP has a wealth of resources on one 4-hectare suburban campus within easy reach of Paris' city center. We look forward to welcoming you and you will find directions as to how to find us below.

If you are familiar with driving in the Paris area: At Porte de Saint Cloud take Route de la Reine and continue straight. At the roundabout at the end of the road, take the third exit, direction Pont de Saint Cloud, and cross the bridge. At the other side of the bridge there is a major junction: Continue straight ahead (going under the highway overpass) and take the D907 direction Vaucresson and Garches and climbing up a steep winding road (rue Dailly which becomes in turn rue Gounod, rue Pasteur and finally Boulevard du General de Gaulle).
Continue straight until you reach the SNCF Gare de Garches/Marnes la Coquette. Take a left turn and return back along the way you have just come in the direction of Paris. Turn right into ASP opposite number 86 Boulevard du General de Gaulle, just before rue Gustave Lambert.

By Taxi
If you give any Paris taxi driver the full school address they should be able to find it.
If any precision is required you can tell the driver that the school is on the D907 opposite number 86 Boulevard du General de Gaulle, just before rue Gustave Lambert in Garches: "L’ecole est sur la route D-neuf-cent-sept en face de la rue Gustave Lambert à Garches." 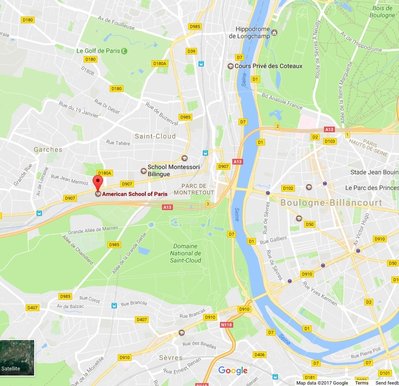 By Metro/Bus
Take the metro line 10 and go to the end of the line (west) to the Pont de Saint Cloud.

Take the exit from the platform marked Musee d’Albert Kahn and the Pont de Saint Cloud and walk two minutes in the direction of the bridge to the bus stop.

Take bus 460 and get off at the stop called "Gustave Lambert" (about 15-20 min) and the school entrance is on the other side of the road.
You will need one carnet ticket for the metro ride, and another for the bus ride which you must validate yourself in the machine located near the bus driver.


By Train
Take the SNCF suburb train from the St. Lazare train station in Paris or from La Defense. Take the train in the direction of St. Nom la Breteche and get off at the Garches-Marnes la Coquette train station.
Coming out of the station, you turn right and walk down the main road for about 5 minutes. ASP will be on your right hand side across the street from the rue Gustave Lambert